The central executive is to working memory as

Watch this video of Baddeley explaining the origins of the central executive. Skip to 5:25 to hear him discuss the four functional components as described above.

Focusing Attention
The capacity to direct and focus attention is one of the most crucial features of working memory. Some have e

ven said that “Working Attention” would be a more appropriate name for the system that we term working memory. There’s lots of research on the central executive’s role in focusing attention, and many researchers, including Baddeley, have studied the attentional-focusing capacity of the central executive in the context of chess. Baddeley had novice and expert chess players try to retain a briefly exposed position with and without distractions. He had three distraction conditions:

1. Articulatory suppression (loads the phonological loop) which had no effect.
2. A spatial tapping task (loads the sketchpad) which had a moderate effect likely because the task itself was a visual memory task.
3. And a random generation task (loads the central executive). Random generation tasks are said to engage the central executive whereas the strictly verbal and strictly visual tasks don’t. In Baddeley’s research, this condition caused the most substantial disruption.

Dividing attention
Studies of patients with Alzheimer’s disease can help demonstrate the function of the central executive in dividing attention. People with Alzheimer’s disease perform well on both verbal and visual tasks, suggesting the two slave systems are functioning well, but they actually don’t do well when performing concurrent visual and verbal tasks. A study done by Baddeley examined subjects with Alzheimer’s throughout disease progression, requiring them to perform two tasks concurrently, one verbal and one visual. Researcher’s determined that people with Alzheimer’s disease perform well on both the tracking and memory tasks as the disease progresses, but that their performance on combined tasks deteriorated significantly as the disease progressed. This provides support for the notion that there is a system separate from the phonological loop and visuo-spatial sketchpad that divides attention between two concurrent tasks. Baddeley associates this function with the central executive.

Switching Attention
Concurrent executive demand increases switch costs, indicating that task-switching is an underlying process of the central executive system. To demonstrate the role of the CE in switching tasks, researchers asked subjects to add or subtract the digit in the first column and the digit in second column. The third column cues them to either add or subtract. There is a switch cost compared to when subjects are simply asked to either always add or always subtract. The switch cost is increased when you give them a cognitive load like a verbal trail. In this case the verbal trail cognitive load was to alternate reciting months of the year and letters of the alphabet: January – A – February – B – March – C – Etc. Simple articulatory suppression did not have any effect. This shows that switching places a cognitive load on the central executive system. But the effects weren’t dramatic, suggesting that switching isn’t a specific subprocess of the CE like focusing attention is. 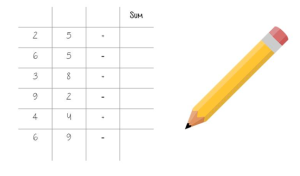 Baddeley has termed the link between working memory and long term memory as well as between the two slave systems the “episodic buffer.” He proposes that the episodic buffer may be either a component of the central executive or a separate subsystem. So why the name episodic buffer? It organizes information into “episodes” or “chunks.” It is a buffer in that it has limited capacity for storage and enables the interaction information coded by different dimensions (i.e. it binds information from diverse sources into unified chunks). Ultimately, the episodic buffer is a temporary storage system that combines information from the loop, the sketchpad, LTM, and perceptual input into a coherent episode.

Check out this interview with Baddeley himself discussing the episodic buffer!

Evidence for the Episodic Buffer
One experiment aiming to support the presence of the existence of an episodic buffer in working memory investigated the boosting effects of long term memory on a verbal working memory task (Darling & Havelka, 2010). There were three conditions: firstly a single item display, a keypad display, and a linear display. Subjects were presented with numbers to be remembered. In the single digit display, subjects were presented with a number which then disappeared and another number appeared on the screen. In the key pad and linear display conditions, numbers on the display were illuminated green and subsequently unilluminated. Then another number on the display was illuminated. The illuminated numbers were those to be remembered. The number of digits to be remembered in each condition ranged from 5-8 and retention of the digit sequence was then measured.

The authors postulated that visuospatial information from long term memory would bind with short-term verbal memory to boost performance. This would result in the keypad condition being the most conducive to retention due to the omnipresence of this conformation in our everyday lives (e.g. PIN pads when you purchase something, or arrangement of digits on your telephone dialing pad). This hypothesis turned out to be correct. People performed better when the digits to be remembered were presented in the keypad conformation. The authors conclude that their results are consistent with Baddeley’s notion that relevant LT memory facilitates encoding and/or retrieval when it is combined with the verbal memory trace in the episodic buffer. 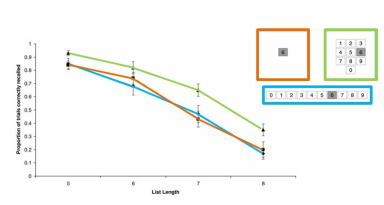